Before leaving town for a New Years weekend (and birthday) spree, I've managed to create and publish the first-ever Secret Moon Art Calendar 2011! Cosmic, Moon, Fairy, and Botanical illustrations are included for kids and adults of all ages, and you know that this Sun Capricorn loves the usefulness of using my artwork on a wall calendar.

Above you see a snippet of the new calendar's cover image, a mossy Hidden Garden with a fairy visitor, and I hope you'll sashay over to Jude Cowell Art Shop at Zazzle where you may view each month of *Secret Moon Art Calendar 2011's images.

*Titles of each illustration are listed on back of the calendar so that images are without text and may be framed later on, as you wish. jc
Posted by Jude Cowell No comments: 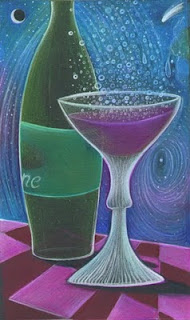 Happy New Year to All!

Well, today is December 28, 2010 and with 2011 soon upon us Secret Moon Art offers a thankful and bubbly toast to all its viewers, visitors, and discriminating art supporters - you're the best!

Waiting round the January 1, 2011 bend is a Solar Eclipse on January 4, 2011 @ 13Cap38 which 'eclipses' my natal Sun. As you know, eclipses are considered 'wild cards' in Astrology (well, in life actually!) so there's no certainty how having a Solar Eclipse for my birthday will play out for the erstwhile artist and blogger who types at you now.

One thing I do know: 2011 will be an important year in some fashion for me personally and it remains to be seen just how. What to expect? Well, 'wild card' evokes similar vibes as those of quirky planet Uranus in a horoscope so 'expect the unexpected' may be my best personal prognostication for the moment!

Astro-Notes: Opposing our nation's natal Sun (the leader), the Solar Eclipse 13Cap38 of Jan 4, 2011 is part of the 13 North Series whose initial eclipse occurred on August 14, 1776 @ 21Leo52 with Jupiter 14Can40 conjunct US natal Sun. It is closely associated with the founding of America and its energy has these particular influences:

Compared to what our nation has experienced in the last decade, this eclipse's influence could be a lot worse, couldn't it? And manifesting so near New Years Day, the eclipse will 'mark' the entire year of 2011 so I sincerely hope it bodes well for our nation and for the world because we could all use a fortunate break about now. 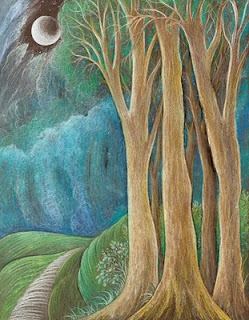 For Holiday Season 2010 and the wintry weather so prevalent across the land, this never-before-published and somewhat brightly colored drawing from 2003 is titled Dog Clouds Gird the Moon.

Wishing Merry Holidays to all Secret Moon Art viewers and supporters and their kith'n'kin!

Concerned over Science's plan to clone a woolly mammoth back to life? Me too, over @ Woolly Mammoth Chronicles.

Like 24/7 Art browsing? Please visit my Jude Cowell Art Shop @ Zazzle, and a Big Thank You goes to All who purchased my art-decorated merchandise in 2010! jc
Posted by Jude Cowell No comments:

Now this is an interesting Art development based on a recently discovered text which allegedly reveals hidden numbers and letters within the mysterious, enigmatic eyes of da Vinci's Mona Lisa!

The figures are microscopic, but found there may be the number 72 which in Astrology represents a quintile aspect having the numerical value of 5, the Number of Man. Double it for 144 degrees of artistic talent, a bi-quintile.

In his book The Astrology of Relationship, Michael R. Meyer gives the quintile division this Keynote: The capacity for creative manipulation of energies and substances for the actual manifestation of visions and plans.

Symbolic Implications: The five senses, the five limbs (two arms, two legs, and the head), the four fingers and the thumb. Naturally, we think of da Vinci's famous drawing of the Vitruvian Man! Perhaps the newly found 'secret figures' are not quite up to 'Da Vinci Code' movie script standards but may turn out to be interesting nonetheless.

Well, the brilliant Leonardo da Vinci, the original Renaissance Man, was a quintile kind of artist with various interests which included the many illuminations of his day.

Read more on such topics here. (And yes, this gnat of an artist was born with a 5th house Mercury-Mars conjunction in Capricorn bi-quintile natal Saturn.)

So we may wish to consider the Earth-Water Sun Taurus-Moon Pisces personality blend of Leonardo da Vinci, born April 15, 1452 in Vinci, Italy (near Florence):

Sun Tau-Moon Pis mixes the Architect of Taurus with the Mystic of Pisces; Taurus is ruled by artful Venus while Pisces is ruled by abundant Jupiter and co-ruled by Neptune, planet of higher inspirations. This blend's vibe includes nature mysticism, creativity, poetry, and a deep love of beauty. It describes one who is easy-going yet determined and has compassionate concern for the needs of others; this is a practical dreamer combo of a man who at heart is very private and yet warmly responds to others.

The mind-body-emotion connection is effortlessly understood by this blend, and sparing time to brood may be a regular indulgence (great for an artist!); a deep connection is felt to Mother Earth, so perhaps Leo had a secret grotto he'd steal way to for pondering purposes!

And in the Harveys' book Sun Sign-Moon Sign, we find mention of Leonardo in the Images for Integration for Sun Tau-Moon Pis:

"Through the power of the imagination a man is healed...A poet prepares his accounts in verse...The Mona Lisa."

So if you're anything like me, December tends to be a very busy month in the real world and it isn't always easy to find blogging or Art time.

Yet today I did manage to place my drawing Blue Winter's Path into my Zazzle Art Shop as a greeting card so don your mittens and have yourself a meander down Blue Winter's Path, or send an image of it along to a friend, if you wish.

Because last I heard, the US Postal Service is still in the business of delivering greeting cards if the effort is made and a stamp attached! Plus, you'll find other cards and stuff at Zazzle as well, so why not have a browse?

With the December 21, 2010 Winter Solstice (and Lunar Eclipse) soon upon us, it all makes me feel brrr-ish just thinking about it...for I do love falling snowflakes served with cups of hot cocoa sipped by the fire! You too? ;p

View the horoscopes, read my Political Astrology notes on: 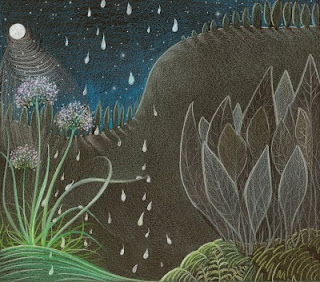 Here's a little Moonlight Rain to celebrate (discreetly, of course!) the December 5, 2010 New Moon in Sagittarius, sign of The Seeker.

The illustration above shows a Full Moon which definitely isn't as dark as tonight, Saturday night, and Sunday night will progressively be for we're in the 3-day Balsamic phase prior to the precise moment the New Moon perfects with the Sun (and I'd need to draw a totally blacked-out Moon to show the lunation precisely, so why not settle for this lighter representation of a Full Moon, yes?)

Because in only two weeks, the Dec 21, 2010 Lunar Eclipse in Gemini will manifest as the culmination and fulfillment of this Monday's New Moon 13Sag28 when seeds of new ventures are planted and nurtured.

Why, it's almost lyrical, the Dec 5 New Moon's Sabian Symbol: '14Sag'..."The Pyramid and the Sphinx" and yet something sinister underneath the symbol cannot be ruled out - especially if you study the mundane horoscopes of Politics and political thespians as I often do!
Posted by Jude Cowell No comments: