In 1982, my family attended the World's Fair in Knoxville, Tennessee. Over 11 million people attended the festive affair and if memory serves, the Chinese Pavilion was the most popular attraction by far. Discovered in 1974, China's famous Terracotta Army was a great hit and was responsible for the longest line we stood in on that very hot day.

Getting the Party Started!

President Ronald Reagan opened the fair with a speech on May 1, 1982 and six months later it closed on October 31, 1982. Now I don't know about Mr. Reagan, but between funnel cakes and our first-ever taste of boxed milk (Parmalat I think it was) our tummies had few if any complaints!

During our visit my children rode the largest ferris wheel any of us had ever seen (or hope to see again if I may say so!) - 165 feet tall - but once they reached the pinnacle Mom (moi) had to be coaxed away to have dinner with friends and thus avoid seeing her (my) kids wa-a-ay up in the sky when the wheel stopped. Because that was the problem -- it was so high they were completely out of sight at the top. Unnerving!

Yet we all survived intact, and once we skedaddled back home to Georgia, my children were inspired to create illustrations of some of the exciting attractions they'd seen. 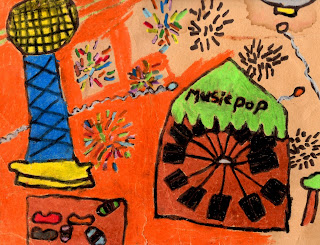