This is a mere art representation in honor of the Autumn Equinox when the Sun seems to 'reach' 00Libra00 on Sept 23. 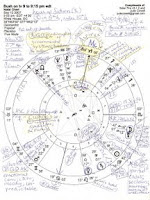 Tonight from the White House, our acting president takes over the tv airwaves to do his "Give me just a little more time and our love will surely grow" schtick once again. The office I respect. Its inhabitant has shown us what he is, and there will be more of same this evening.

If you're on-blog you may wish to click-to-enlarge the 9 pm chart where you'll see more notes than I can possibly type for you. But a few factors stick out like sore thumbs--that's the plummy thumb of power and control.

Even if he begins a minute or two after the hour, this chart symbollically represents the 15 minutes of pleas, anger, and threats we shall hear.

The 9 pm time is during an hour of Saturn--a good time for control and authority issues. If he speaks for 15 mins as advertized, the hour will become Jupiterian, suitable for expansion, religious concepts, and war.

Corporatism's signature lies elsewhere in the chart as well as the Pluto/Chiron midpoint is being pointed to at MC--oppression as a goal, class warfare as an aspiration.

At speech's end, Neptune/Pluto's midpoint, the pair of the Generation of Materialism (1892-93; robber barons: pillagers, speculators, spoilers) yet of course we may see this as a Middle Eastern motif--Neptune/Pluto with a Jupiter influence...sectarians.

Vengeful Venus is one of two planets which change houses during his nibs' 15 minute-presentation--Venus 17Leo08, the heart of the Scorpion degree, approaching her position on 9/11/01--which conjuncts the national ASC of Iran.

The other 'planet' to change houses is the Sun 20Vir50, conj Fixed Star, Denebola (Beta Leo), keywords: to go against society; being on the edge of the establishment.

Denebola is a very interesting star, and since it is linked to the Sun in this chart (Sun = the leader in a national chart), I call its influence for George Bush.

It is in the constellation Leo as is a Royal Star of Persia, Regulus, keywords: success if revenge is avoided. Zosma is there also, representing ones who are victimized by the system and minority group needs.

Please remember, Y'all--it is no pleasure for me (to attempt) to underrate or undercut Bush-as-President. He does that all by his lonesome, as a matter of fact.

The only nag I ever had in the race is/was America, so it's what he's brung to the party during this interminable tenure of a megolomaniacal, messianic-complexed, street-fightin' hombre of a sidewinder that I fuss about. To dissent from having a fascist America is simply how I roll as a child of the Revolution--I know of no other way to be when it comes to my country.

A Higher Power will reward Mr. Bush for his motivations and for what he has wrought upon the planet, and a Bush political "legacy" is as a nuthin' muffin when it comes to that Day. If by their fruits ye shall know them means anything, this man surely manifests a lot of mayhem which seems to follow him where 'ere he goes. Even flying in circles on 9/11/01 as diversionary tactic seems to show he was being sought.

Tonight's speech when averaged with Bush's natal chart (2 charts used--Composite Natal and Composite Davison, not shown) shows a tremendous awareness of the potential for loss. What he discounts publicly is that his early lies which have lead to the impossible gumminess and tragedy of our valiant soldiers being based in the Holy Land as occupiers--a fact which is too large to be denied--is that he doesn't want the 'withdrawal' to be on his 'watch' because it won't be going so well, if history is our teacher.

His waggeldy tail will droop like a scalded dog if he's forced to ace us out of the desert, and his own demons (as a victim of the Unconscious--Cetus the Whale, Menkar) may possibly overwhelm him. No one is a match for the Collective Unconscious once the dragon awakens.

And with tr Saturn in process of meeting the tr South Node (SN = tail of the dragon) (October 07) we may wish to read this as past Saturnian work (Virgo; also health) being swept aside by the dragon's tail.

Well as always, there is much more to say about this chart, but I leave you for now to click/enlarge the chart to read my scribbly notes--there's a large thunderstorm on the way here, even at my door! Perhaps I may update this post after Bush speechifies...must correct dumbleheaded typos.

So let me know what you think about the whole mess.
Posted by Jude Cowell No comments: 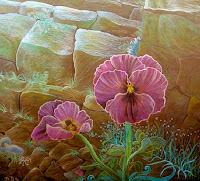 This detail from a 1996 "time capsule-esque" drawing makes its first-ever debut online in honor of Sep 11's Solar Eclipse--and the fact that purple pansies are faves around here in the flora category. This image may contain my best rendering of stone steps ever!

You may see the full view, including a touch of the Eclipse at Cosmic Persona Designs.
Posted by Jude Cowell No comments:

Giant Red Kelp is ready for her close-up but the fishier view of this drawing may be seen at Dreamyfish Art so bubble-float your way over for a sneak peek!

And to honorably score some Art Downloads, visit my Cosmic Persona Designs Storefront if you wish. New Art for modest prices--what more could you want, Sparkie?
Posted by Jude Cowell No comments: 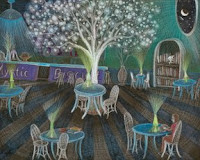 Milk or lemon? Green or Constant Comment? Hot or cold? And how about an Astrology book with your order?