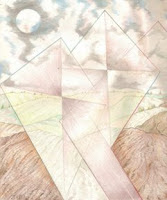 Here's a drawing from my Nostalgia Files, Moon Reflection Pyramids, done on white paper--way back in 1995! 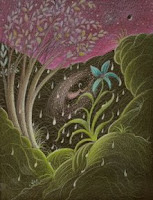 Pink Fairy Pink Dawn, drawing by jude cowell (c) 2008 Use by express permission only
Posted by Jude Cowell No comments: 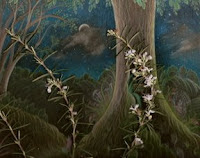 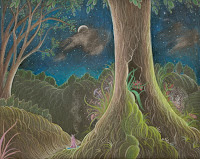 Cloudy Moon Night--drawing on left, and the same drawing above but with sprigs of fresh-blooming rosemary from my garden scanned upon it just for fun. 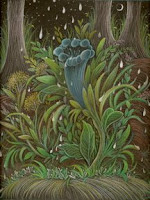 Totally made this up--to my knowledge there are no such things as Blue Trumpet Flowers, but there is moonlight and my imagination.

Blue Trumpet Flower by jude cowell 2008 Use only by express permission of artist.

Which reminds me...I heard that the Hollywood writers' strike may be ending soon which is good because I want to see more episodes of my favorite new show: Moonlight. I'm not a fan of the vampire normally but a humanitarian vampire is a difficult paradox to ignore!

Yes, Moonlight came back from the writers' strike but was cancelled at the end of its run - which grumped me up considerably. Anti-kudos to CBS. :-(
Posted by Jude Cowell No comments: 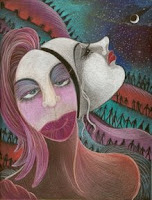 Lady Unmasking is drawn and published in honor of the Feb 7, 2008 Solar Eclipse in the 10 North Series.

Keyphrases for this Series which last manifested on Jan 26, 1990 (so similar issues may resurface from that time period) are:

strong emphasis on communications; frustrating or inhibiting events occur relating to news, paperwork, or a young person; a draining of energy--take things quietly for there's an element of fatigue with this Series. (Brady's Predictive Astrology.)

Yes, Lady Unmasking is a bit of a departure for Secret Moon Art, for my figure studies and mask-related images are usually published at Cosmic Persona Designs with Children's, Botanical, and Fairy Art published here at SMA.

Plus, I hope you don't mind a smidge of Astrology with your Art today! I have sashayed into Astrology here before--it is Secret Moon Art, after all.

Why "Unmasking"? The reason some folk call this the Unmasking Eclipse is because it falls at "18Aquarius" and the Sabian Symbol for that degree is "A Man Unmasked."

This speaks of a man's secret motives being revealed due to the impossibility of keeping one's true motives hidden forever...and '18AQ' is the opposite degree of Venus' position on 9/11/01.

Venus' degree on 9/11 was same as the Sun/Moon degree of the August 11, 1999 Solar Eclipse...aka the King of Alarm Eclipse which set the tone for the New Millennium. Sour note so far, right?

Nostradamus' description of this difficult Eclipse related primarily to monetary issues and we know that the attacks of 9/11 were aimed to decimate our financial system.

Yet even Washington DC may fall prey to the influence of the Feb 7 Eclipse, for they have the most secret motives of all...and the most to gain by keeping things out of sight.

To read more on Washington and its starry doings, visit Stars Over Washington and for a blend of stars, politics, Art, and the occasional lapse into poetry, drop by Jude's Threshold where you'll find an article in the blog's Sidebar with more details on the King of Alarm Eclipse of August 11, 1999.
Posted by Jude Cowell No comments: