A Fairy on Threshold Path! 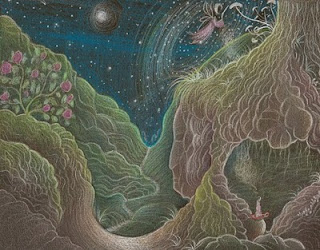 Perhaps it's no surprise to you that there's a Fairy on Threshold Path! 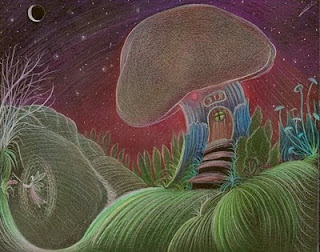 318 Silvery Tree Path is a fairly recent drawing inspired by the first children's dummy book I ever created called Silvery Tree Path. Fairies were not supposed to show up in my drawings back then for they weren't consciously invited, yet pink fairies appeared anyway which is a typical happening when you draw on black paper!

You know, there's something about black paper that I've always liked. Perhaps it's the 3D feeling I get when shading layers of colors as images form and seem to come out of the blank page toward the viewer which encourages whatever visionary or visualizing ability a pencil artist possesses. Actually there's almost a sculptural quality which I never get when drawing on white paper.

There can be a definite spiritual, cosmic quality as well - perhaps because the black areas suggest an abundant cosmos of vast space to my astrologer's eye. I am a fan of the cosmos!

Anyway, you see here one of my 'shroomhome' illustrations wherein tea and buttery scones are served in front of the fireplace each evening and one reads fascinating books late into the night...

If you like cosmically inclined art, you may also be interested in viewing Night Scene of a Secret Moon which retains a lot of the black paper before the drawing was completed and colored. Wish I'd left it in this unfinished version!

Oh, and I added some Cetus the Whale info, too, for good measure.
jc
Posted by Jude Cowell 2 comments: