(from the Sabian Symbols)

The Eye on the Wall ...featuring a coffin excavated from Deir el Balah...Moshe Dayan had a paw in the retrieval and collectorship of 20 of them. This design is a semi-rendition of one of the more anthropoid of the lot--anthropoid because they have human facial features.

Deir el Balah is south of Gaza on the coastal plain. The sarcophagi date to the 14-13th centuries BC, a time when when Egypt's New Kingdom empire may have extended into southern Canaan.

The identity of the residents of these effigies could be anyone's guess but a few of the usual suspects range from military officials, Egyptian civil servants and engineers, and other dignitaries.

I can assure you that the 20 coffins make a solemn assemblage of the first water each with his expressive face in a different pose or style.

Last I heard (my info is from a Biblical Archaeology Review magazine from the July/August 1986 issue...a bit outdated yet valuable as a perspective which one may hear echoing from 1986. It's a fascinating magazine/hardcopy from the past, that's what it is.)

Moshe Dayan, amateur archaeologist and Israeli general, collected many more items than you might think he should have...perhaps you do, perhaps you don't.

But the point may always be made that if Dayan had not had the means and the willpower to do this collecting, the coffins might have been decimated by bulldozers or just never discovered in that sandy old cemetery...these relics are quite older than what most people have truck with in their daily grinds unless you hang with the museum herds which are liable to be grazing about.

Dayan's widow was paid 1 million dollars for the Collection thus keeping it intact at the time but that was 20+ years ago, people! Someone get to Googling or ixquicking, ok?

Because I wonder if the Boys are still together? ;D
Posted by Jude Cowell No comments: In the years 2027-28 Chiron returns to discovery degree 3Tau08--three times due to retrogradation. This drawing is a paltry representation of just such a wondrous night as may be expected from a Wounded Healer who cares. The Sabian Symbol for '4 Taurus' is "A Rainbow's Pot of Gold" and describes the rewards which are guaranteed by an eternal covenant between the least of individuality and the universal matrix of life itself. The keyword for this Symbol is FAITH in the Marc Edmund Jones' version of the Sabian Symbols, quoted above. Dane Rudyar gives this Symbol as COMMUNION, involving a transubstantiation of matter. Keynote: Riches that come from linking the celestial and the earthly nature. 'What the linking process brings to the individual consciousness is elusive, as the rainbow never ends where you are, yet it is the source of symbolic, universally valid wealth.' Sounds great to me! ~:~The Sabian Symbols in Astrology, Jones; An Astrological Mandala, Rudhyar.~
Posted by Jude Cowell No comments: 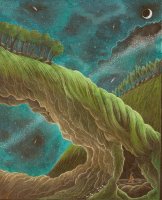 For some Plutonian reason, I've always like to draw caves as starry observatories...it's fascinating to me to think of watching the heavens bwo a cave...from one extreme to the other, I suppose. You might say it relates to using Astrology for depth Psychology, mightn't you? 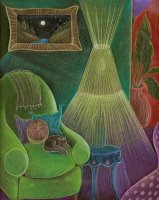 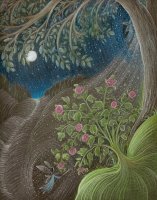 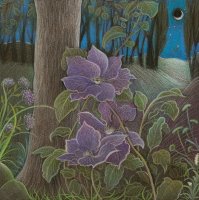 Clematis, 'Mrs. Cholmondeley' has bustled into Secret Moon Art to take Tea with all her friends!

Poisoned Apples of the world 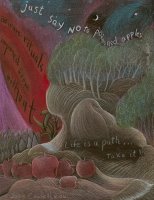 Happy New Year to All from Secret Moon Art! Here are some words for 2007 with some good and free advice about some poisoned apples I have known and chomped on...
how about you?

Want more art? How about Dreamyfish Art for botanical drawings of tropical fish, or Cosmic Persona Designs for an electic mix of archetypal portraits?

And I'm loathe to inform that there's been a dastardly kitnapping over at Lim's Limericks which mysteriously relates to the former spy-cats who hang about the place blogging...

Plus, you'll find a Mozart tribute with one of my pencil renderings of the Maestro at Stars Over Washington written while the Metropoltican Opera broadcast--in Real Time!--the English version of The Magic Flute all over the world Saturday...Herr Mozart the Ultimate!

Stop by for a schmooze with me at judecowell.gather.com and see what's been harvested and gathered at Gather. Hope to see you there!