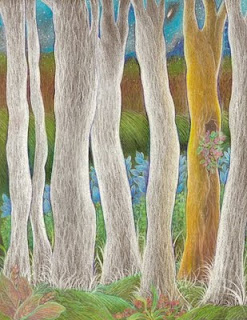 The 7th Tree is the one unique from the rest...do you feel like a 7th tree?

How interesting! Tell me more...and click this post's title to visit my Art Shop @ Zazzle if you wish.
Posted by Jude Cowell 2 comments: 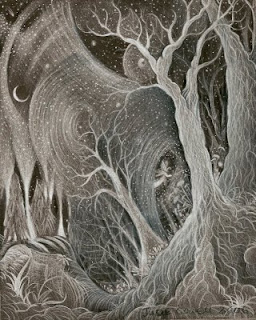 Spooky Fairy Night, another artful offering on behalf of the upcoming winter season here in the Northern Hemisphere!

Of Family Genealogy and stuff:

Oh dear! Guess this is all that remains of Kyle Castle in Great Britain and my Cowell-Kyle-Coel-Coil-Coyles-Coilus-Cole family members circa 2009 must be living elsewhere by now...let us hope.

A friend sent me this photo a while back and I don't know who snapped it. The pic may be from a website so if this is your work, you have only to let me know to receive a deserved photo cred, no problem!

Until then, I'll be sleeping in America where my ancestors migrated afar from their Old King Cole/King Coilus remembrances of long ago...such as...

King Coilus was King of the Britons in Roman times, I've read, and there were thought to be 3 of them - father, son, and grandson, at least one of which was an early astrologer. (This would apparently make me a late astrologer.)

In fact, if you know anything about Astrology charts, you're familiar with the terms Medium Coeli (Mc) and Immum Coeli (Ic) with 'coeli' meaning 'heavens' or 'sky.' Well, you'd be under the heavens and stars for certain if you slept a night in Kyle Castle!

Interestingly, the ancient city of Colchester may figure in to the legends somewhere, and although I've seen Colchester featured on PBS' Rick Steves travel program, I have yet to walk its narrow streets in search of a distant cousin or two. But I do know that if you say 'Kyle' or 'Kile' with the right accent, you get what in America sounds like 'Coil.'

And few believe its verity, yet I've read that when William the Conqueror first arrived in England one of his men struck the land (presumably with his sword) and is said to have been given the surname Strickland ('Strike land'.) Funny that, since my Dad's mother was a Strickland. William built Colchester Castle in 1076 on Roman ruins - the Temple of Claudius - to give it strength which must have worked since it's available for touching if you but go there and lay your hand upon it.

Yes, these old chieftains of Eire are sometimes known as Coel Hen - Coel the Old) which I assume to be an 'Old King Cole' reference, but who knows? It was all so many centuries ago.

Plus, it may be the case that King Coilus' daughter
Helen married - or birthed, I never remember which - Emperor Constantine and both of them went mad for Christianity as promoted by the Catholic Church. (I say that because in America my family has been firmly Protestant for as long as we can remember! Yet back across the ages and the seas to Ye Olde Country, who knows? Druids, perhaps? ;p)

Well, you may wish to merrily check out more ancient history about King Cole and Roman Britain at Wikipedia, but Bing or Google for more links and sites where some industrious folks have traced their lineages back to ancient Britain, but most are just full of misty history.

Now perhaps you've never read the Page in the sidebar column of my Word Press blog wherein I detail the harrowing evening of my entry into the space/time flux of Planet Earth. You see, a personal name asteroid Cowell arose that evening, a few minutes later I was born, then asteroid Judith arose a few minutes later.

And who synchronistically named the little squalling babe on that dark winter's night? My Dad, of course, for he obviously knew a fellow Cowell when he saw one!

Disclaimer: no ancient chieftains or merry fiddles were harmed in the typing of this post; spelling of author's family name has been slightly adjusted to echo its astrological spelling, Cowell, and 'Jude' is short for Judith. jc 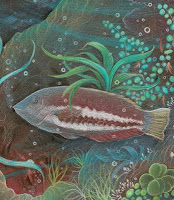 A small Red banded wrasse has floated in to say, check out my Zazzle Art Shop for botanically drawn fish designs on various products and apparel! Can fish make good mousepads? you ask. Why, yes they can and do.

Plus, here's a heads-up direct from me to you:

A new Links List has appeared in Secret Moon Art's sidebar column containing a few of my favorite Zazzle Shops - more will be added soon - so do swim over the 'net when you can and visit their wildlife offerings and wonderful nature paintings, too.

Or you may wish to check out my designs at Cafe Press, if you prefer their site.

After all, gift-giving season nears, y'know!
Posted by Jude Cowell No comments: