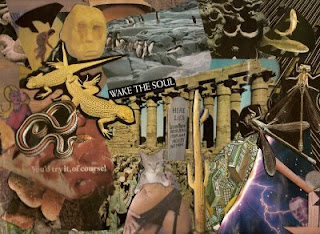 ~:~
Have you seen this collage before? It's entitled, Cat Archaeologist for obvious reasons!

Or is it? (Click to enlarge.)
Posted by Jude Cowell No comments: 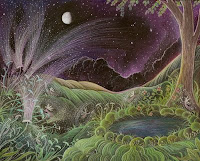 Fairies Visit Goldfish Pond, a drawing by Jude Cowell 2009+; an original illustration from Pattillo Armadillo and the Dream of Green.
Posted by Jude Cowell No comments:

In an unsual move for Secret Moon Art the video of Adam Lambert's rendition of Mad World is being posted here for you to enjoy in case you've been underground for months and haven't seen his performance from the 2009 season of American Idol.

As you've heard, Wednesday night was the AI finale of the competition and Kris Allen gained the crown rather than Adam. Then a headline I noticed afterward called Kris the 'dark horse' but someone must be messin' with our minds because archetypally Adam Lambert plays the dark one, with Kris a lighter version of The Singer archetype.

So oddly enough, it was the 'light horse' pulling ahead of the shoo-in, as some would say. Even Kris seemed surprised - yet with a Rx Mercury 26Tau+ now conjunct the degree of difficult Fixed Star, Algol, the vote (Mercury) may come under dispute or review in some way (Rx.)

Yet on another level, the Mercury/Algol link could be a reference to the strength of young voters going in another direction than expected and full of life force.

Then there's the unfortunate revelation that millions of personal records and info have disappeared from America's National Archives in Washington, DC.

Supposedly someone's back got turned as the Clinton administration records were being digitally tranferred to the NA hard drive - and one of 100 staffers (or the janitor, visitors, interns, and your Aunt Granny Fanny) could have moseyed through on a tour or perhaps going to the restroom.

Quite a thoroughfare in which to leave unattended a sensitive national hard drive. And if you're thinkin' what I'm thinking, it's: first they steal the money, now it's the Archives with our Social Security #s - once again we're caught with our knickers down yet it's someone else doing the mooning (at us suckers.)

Oh well! Affected individuals will be notified, so keep your cell phone primed and wait for their text message if you're one of the lucky ones.

And the acting director for the Archives has been called to testify on Capitol Hill on Thursday, May 21, 2009, so let's have Adrienne Thomas explain all the what what she can about the this inexcusable matter which could very well be treason.
Posted by Jude Cowell 2 comments:

A Portrait of Golden Chanterelles 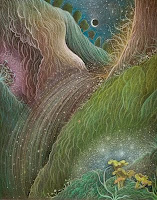 Abandoned Garden with Peonies is appearing again to say Hello to Secret Moon Art's TWO discriminating Followers so check out their particulars in the sidebar to your right!

All Art Images are drawings by Jude Cowell 2009+ unless they're photos taken by Maya.

And my latest blog is Two Hours You'll Never Get Back, a tapestry blog woven from many subjects, so do drop by whenever you may.
Posted by Jude Cowell 2 comments:

A view of The Great Lichen Forest 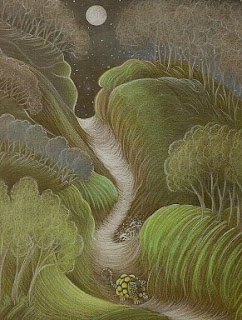 Here's Pattillo Armadillo as he scampers toward the Great Lichen Forest, his hero's journey almost complete!

Illustration from 'Pattillo Armadillo and the Dream of Green,' my unpublished children's book which traveled to NYC to be considered for Little, Brown's publication list 2004/05.

Relax! and stroll down another Cosmic Art Path to a magical forest where Indian pipes bloom enticingly from the forest's mulchy floor.

And here you may see the celestial sights that Pattillo enjoyed when he stopped at the Turquoise Observatory during his hero's journey to the Great Lichen Forest!

With or without fairies, Children's Art is so fun, isn't it?

The thing about my character, Pattillo - he can never see the fairies all around him (armadillos have notoriously bad eyesight, more's the pity, but they make up for it in other ways), yet you, Lone Viewer, may always spot a fairy or two flitting about and watching over the little fellow!
Posted by Jude Cowell No comments: