Mrs Cholmondeley of the Clematis Family drops by!

Today Secret Moon Art is happy to Welcome Mrs. Cholmondeley of the Clematis Family for tea! So the question must be, milk or lemon? 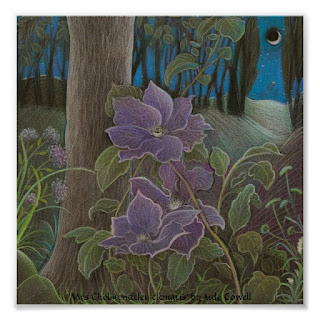 And perhaps you know that "Cholmondeley" is actually pronounced, "Chumley"! Well, this and other details concerning this lovely bloomer may be found on the International Clematis Society website!

The Prophetic Daughter of King Priam and Queen Hecuba

As Putin's war against Ukraine rages on, I want to publish something with a mythological theme here on Secret Moon Art.

So here are a few words concerning Kassandra (aka, Cassandra), a prophetess in Greek Mythology, plus, my drawing Kassandra's Blessings because everyone across the globe could use a few of those just now, even non-believers. How about you? 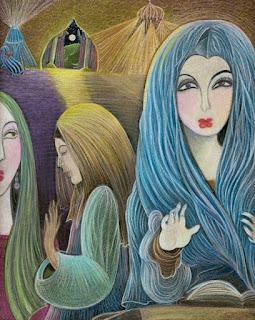 Well, perhaps it isn't the best idea to imply by my drawing that the 'blessings' of Kassandra are a good thing even though it was drawn years ago (pencil on paper). For she is often considered in Greek Mythology to be a tragic figure whose gift of prophecy came from sun god Apollo yet he cursed her so that no one believed her prophecies. That she rebuffed the advances of Apollo is one explanation of Apollo's turn against her but there are other possibilities.

Anyway, Cassandra prophesied that her brother Paris would start a war against the city of Troy and this includes the very famous tale and archetype of the Trojan Horse. Additionally, Cassandra's death links to the fabled death of King Agamemnon of Mycenae.

So if you don't know where your natal asteroid Kassandra is, consider the following list of a few related asteroids and their numbers which can be plugged in (by number) on the Serennu website along with your birth date (or any date you choose) and the Astrological Ephemeris will disclose their Zodiacal positions to you: 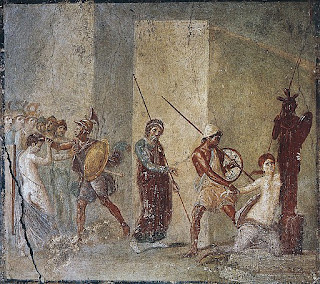 Ajax in Troy drags Cassandra from Palladium before the eyes of Priam.