Night Scene of the Secret Moon 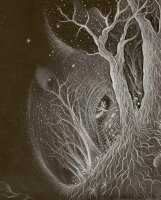 Number 1v1...fairies showed up uninvited, but I suppose they generally would.

And what is a 'secret moon'? There are Black Moons, three Liliths (which at least one may be referred to as Black Moon Lilith) plus you'll see mentions of Dark Moons such as 'dark moon w'mat2' and such in Astrology. Yet Astrology is a language which DESCRIBES these things--it doesn't perpetrate them. Opposite our physical Moon is a dark point in space--a non-Moon...exactly where the Moon is not...and most definitely an unconscious, hidden point.

Then there's the dark phase of the moon--the New Moon when the Sun and Moon catch up with each other and no light reflects from our satellite Moon. This is the beginning of the most basic cycle we know--the Sun's consciousness + Moon's unconsciousness-->Sun = adult personality, and Moon = childhood, or even "the divine child" within.

The Moon's position in your natal chart describes genetic inheritance in a fundamental way and tells about your reigning needs. Then one may translate these factors into archetypal images and myths under which we all must labor. The Moon is tribal...the astrological Moon is the Mother archetype and the nurturing principle. And so she has connections to Ecology and to Environmentalism...to our Mother, Earth.

The Collective Unconscious is very active in the world today and we especially see CETUS the Whale lifted up in many ways--a constellation's myth which is connected to Jonah and the Whale--recalcitrant Jonah who refused to Say What Should Be Said.

...and someone speaking the truth would be refreshing for a change, wouldn't it?

Speak it if you know it!

Liminal Limericks from the Collective Unconscious may be investigated at Lim's Limericks by A.Cat featuring a pinch of hopeful humor tossed in as a garnish!
Posted by Jude Cowell